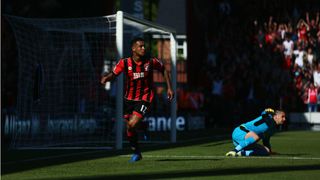 Josh King's late strike ensured Bournemouth moved up into the top half of the Premier League courtesy of a dramatic 2-1 victory over Burnley.

In a late flurry of activity at a sun-kissed Vitality Stadium, King's 16th league goal of the campaign ensured Eddie Howe's side claimed the spoils from their final home game of the season.

With their respective top-flight futures secured heading into next season, both sets of fans were in a celebratory mood, though the game never really took off until the 83rd minute, when Sam Vokes cancelled out Junior Stanislas's first-half effort.

That moment of quality from former Claret Stanislas punctuated a low-key affair, until Vokes - who started his career at Bournemouth - headed in Johann Berg Gudmundsson's cross.

However, it was not to be for Sean Dyche's side, who have relied on their superb home form to keep them up this season, as King thumped home at the other end under two minutes later.

The victory lifts Bournemouth - who face Leicester City on the final day - up to 10th place, and represents their first win over the Clarets in any competition since 1998.

Buoyed by a vibrant atmosphere, Bournemouth started quickly, Stanislas looking sharp as he latched onto King's throughball to steer in a dangerous cross that Kevin Long - again filling in for the injured Michael Keane - did well to clear.

Bournemouth had their lead prior to the half-hour mark, though - Stanislas catching Stephen Ward cold with a clever run inside and taking Lewis Cook's pass under control brilliantly before slotting in past the advancing Tom Heaton.

2 - Junior Stanislas has scored in consecutive Premier League games for the first time in his career. Opener.May 13, 2017

Burnley responded well, and Scott Arfield should have perhaps done better with a wayward strike from the edge of the area before, at the other end, Marc Pugh fired straight at Heaton despite having King in plenty of space to his left.

Arfield should have made Bournemouth pay for Pugh's mistake, but the midfielder could only prod a tame effort at Artur Boruc from point-blank range.

Boruc was not tested until 11 minutes into the second half, however, when Arfield sent a curling strike just wide of the right-hand upright.

Substitute Gudmundsson finally sparked the visitors into life, and it was from his whipped delivery that Vokes helped the ball past Boruc, restoring parity.

Bournemouth were not to be outdone, though, Ryan Fraser supplying a neat cross into King, who made no mistake from six yards out to bring the curtain down on another impressive home campaign for the Cherries.

- Bournemouth have lost just one of their last six home league games (W4 D1), having won none of the previous five at the Vitality Stadium (D2 L3).
- Burnley lost for the 14th time on the road in the Premier League this season – no side has lost more away games in 2016-17 (Hull also 14).
- Josh King's goals have been worth 12 points to Bournemouth this season - only Diego Costa's (15) and Sergio Aguero's (13) have been more valuable to their club.
- Sam Vokes scored his ninth Premier League goal of the season – only Danny Ings (11, in 2014-15) has scored more in a single campaign for the Clarets.
- Indeed, Vokes has scored four goals in his last four Premier League games, after having found the net just five times in his first 58 in the competition.
- There was just one minute and 58 seconds between Vokes' equaliser and King's winning goal.