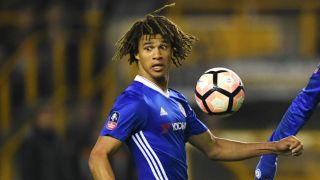 Bournemouth have completed the club-record signing of Chelsea defender Nathan Ake for a reported £20million fee.

The 22-year-old has signed a long-term contract after his move was completed on Friday, hot on the heels of the club's capture of former loan star Jermain Defoe.

"I am delighted that we have completed the signing of Nathan on a permanent basis," said manager Eddie Howe.

"He is someone we know all about, having had a successful loan spell last season. Nathan is an outstanding young player with a fantastic attitude and a great desire to learn and develop. He has a very bright future ahead of him and I'm very pleased to say that future is here."

Ake spent the first half of 2016-17 on loan at Bournemouth, making 10 Premier League appearances before being recalled by Antonio Conte in January.

He played in two top-flight games as the Blues won the title and made a further three in the FA Cup – including the semi-final victory over Tottenham at Wembley.

Ake had also been linked with Newcastle United, Southampton and West Ham before opting to return to Bournemouth.

He made his Netherlands debut in a friendly against Morocco last month and won a further cap against Luxembourg in World Cup qualifying.

Ake joins Defoe at the club after the England striker signed a three-year deal to return to Vitality Stadium on Thursday 16 years after a fruitful loan spell from West Ham.

Bournemouth, who finished ninth last season, have also signed Asmir Begovic for a reported £10m from Chelsea ahead of the new season, which will be their third consecutive campaign in the top flight.