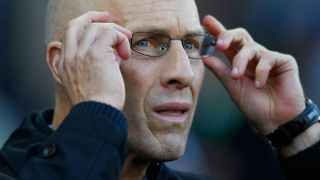 Bob Bradley accepts his Swansea City side did not do enough to win the support of their own fans in Sunday's 3-1 Premier League defeat to Manchester United.

A Paul Pogba half-volley and a Zlatan Ibrahimovic brace saw United run riot in the first half at the Liberty Stadium, before Mike van der Hoorn pulled back a late consolation.

Swansea supporters vented their frustration at the club's board during that dismal opening period, chanting 'We want our club back' after the controversial circumstances of their American takeover, and booed their team off at the break.

Asked if he felt he was losing the support of the fans, Bradley said: "There's only one way to win the support of fans, and that's to play better and take points.

"From the players' and coaches' side of things, we have to focus on the part that we control.

"That's how we play, how we compete and how we fight for points.

"If the fans are angry at half-time, I understand that. We didn't do enough to win them over in any way.

"They have every right to be angry at half-time. We have to be honest about the work that needs to be done.

"We have to get some positive results. Once we get a result or two I think everyone will say 'Okay, we have finally turned this thing around', but right now we are going through a tough stretch.

"We understand very clearly where we are. There's no hiding from the situation.

"We know all the areas where we need to be better."