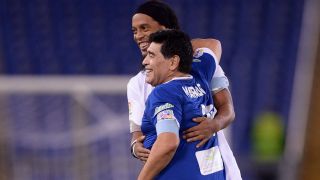 Ronaldinho is currently considering three proposals to return to football, according to his agent and brother Roberto de Assis Moreira.

The two-time former FIFA World Player of the Year appeared to bring his playing career to a close when on September 28 2015 he reached a mutual agreement to depart Fluminense after less than three months with the club.

Now 36, the ex-Barcelona superstar never formally retired from football and made an appearance in the Match for Peace charity game organised on behalf of Pope Francis on October 12.

And he could be primed for a return to the professional game, with Roberto claiming several approaches.

"We have three proposals we are considering," Roberto told O Jogo.

"Ronaldinho will decide what to do. We are in no rush.

"He is happy when participating in events and travelling around the world."