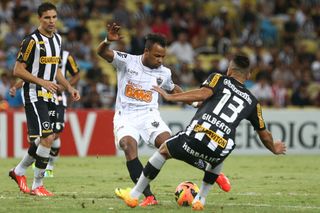 Fernandinho scored just four minutes from time to give the home side victory and consign the table-toppers to a second straight defeat.

Mineiro's win has seen them leapfrog Vitoria into fifth spot on the ladder, while Cruzeiro are 10 points clear at the top after Gremio could only manage a 1-1 draw with Fluminense on Saturday.

Gremio looked like they would secure a win when Bressan opened the scoring on 38 minutes before Fluminense's Biro Biro was sent off 17 minutes from time.

But there was late drama with the hosts bundling home an equaliser in stoppage time from Rafael Sobis to pinch a point.

Botafogo have moved up to second spot, equal with Gremio, after coming from behind to beat Flamengo 2-1 at home.

Atletico PR extended their unbeaten run to three matches after a 1-0 win over Portuguesa to remain in fourth spot, while Goias moved up to eighth spot with a 3-1 demolition of Bahia.