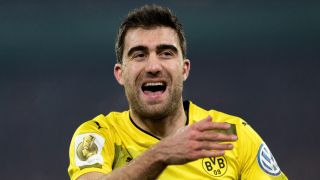 Arsenal have confirmed the signing of Sokratis Papastathopoulos, the defender joining the Premier League side from Borussia Dortmund.

Sokratis was previously been linked with a move to Manchester United, but has instead opted to join Arsenal.

The 30-year-old defender has agreed a long-term contract at the club, with Arsenal paying a reported €20million for the Greece international.

Sokratis previously played for clubs including Werder Bremen, AC Milan, Genoa and AEK Athens but has been at Dortmund since 2013.

He helped the club to win the DFB-Pokal in the 2016-17 season, also claiming a brace of DFL-Supercup crowns during his time at Dortmund.

Sokratis is the third player to join Arsenal since the appointment of Unai Emery as the club's new coach, following former Juventus full-back Stephan Lichtsteiner and goalkeeper Bernd Leno to Emirates Stadium.