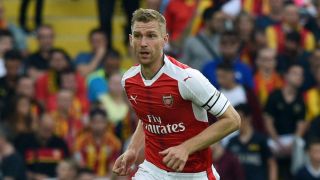 Arsenal defender Per Mertesacker will be out for "a few months" with a knee injury, manager Arsene Wenger has confirmed.

Mertesacker was not named in Arsenal's squad for their tour of the United States on Monday, having sustained the problem during last Friday's friendly against Lens

And following reports that the Germany World Cup winner could be out for up to five months, Wenger announced he would be without the experienced centre-back for the foreseeable future, although he did not place a timescale on his expected return.

As Laurent Koscielny recuperates from his efforts for France at Euro 2016 and with Gabriel Paulista laid low by tonsillitis, Calum Chambers is Arsenal's most experienced centre-back in the States for matches against the MLS All-Stars and Chivas.

:speech_balloon: The boss announces in his press conference that will be out for "a few months" with knee injury July 26, 2016

The shortfall at the back presents England Under-21 international Rob Holding, a recent arrival from Bolton Wanderers, with an early chance to press his claims to Wenger.