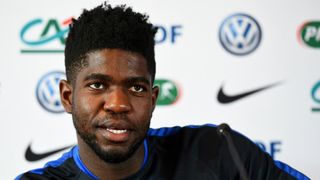 Barcelona have announced the signing of France international Samuel Umtiti from Lyon on a five-year deal for €25million.

The Liga champions confirmed that a deal had been reached for the 22-year-old last month, but were waiting until the end of Euro 2016 to finalise personal terms with the player.

"FC Barcelona have signed Samuel Umtiti from Olympique Lyonnais for the next five seasons," a Barca statement released on Tuesday confirmed.

"FC Barcelona have paid 25 million Euros for the player. Umtiti's buy out clause is 60 million euros.

"Samuel Umtiti will arrive in Barcelona on Thursday afternoon local time with a photo session planned outside the Club offices at a time yet to be decided.

"On Friday July 15, in the morning the player will undergo a medical before signing his contract."

The versatile defender, who came through Lyon's youth academy, impressed for France during his three appearances in the knockout phase of Euro 2016.

He becomes Barca's second signing since last season, following the arrival of Denis Suarez from Villarreal.