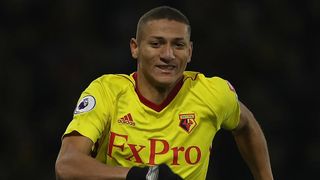 Winger Richarlison has been reunited with former manager Marco Silva at Everton after completing a move from Premier League rivals Watford.

The 21-year-old arrives at Goodison Park for an undisclosed fee, although it is believed to be close to the club-record £45million they splashed on Gylfi Sigurdsson last season.

Richarlison has signed a five-year deal and becomes Silva's first signing since his appointment at the end of May.

The former Fluminense player enjoyed a fine start to life in the Premier League last term as he netted five goals by mid-November under the guidance of the then-Hornets boss.