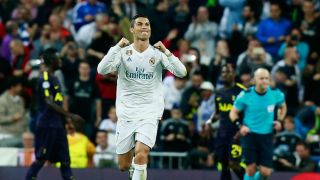 Cristiano Ronaldo was named as the FIFA Best Men's Player for the second year running on Monday after helping Real Madrid to a LaLiga and Champions League double last season.

The Portugal star edged out perennial rival Lionel Messi and the Argentinian's former Barcelona team-mate Neymar to win the award, which he also claimed in its inaugural year in 2016.

Ronaldo's successes with Madrid last term were crucial in him securing yet another individual accolade, with the 32-year-old scoring 42 goals across all competitions.

The most notable achievement for Madrid was becoming the first club to retain the Champions League title since its inception in 1992, and they also wrestled the domestic crown from bitter rivals Barcelona.

Ronaldo's goals were vital on both fronts, with his haul of 25 in LaLiga making him the division's third top scorer behind Messi and Luis Suarez, while he also netted 12 in 13 Champions League matches, including two against Juventus in the final.