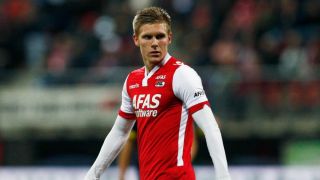 Johannsson moved to the Eredivisie in January 2013 and has scored 29 goals in 60 league appearances for the club.

The 24-year-old striker, who has scored four goals in 17 appearances for USA, will now continue his career in the Bundesliga after signing a four-year deal with Bremen.

"This is the right step to move forward in my development," Johannsson told Bremen's official website.

"Werder Bremen is a great club where I will do my utmost to develop myself and to make my contribution to the team's success."