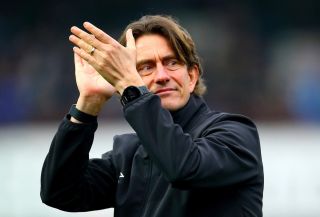 Disappointed Brentford boss Thomas Frank said Nottingham Forest’s timewasting from the first minute was a huge compliment to his team.

The Bees were thwarted by a Forest side intent on breaking their rhythm even before their 14th minute match-winner from Joe Lolley’s deflected volley.

Forest keeper Brice Samba picked up a yellow card midway through the first half for persistent timewasting and that, along with some experienced game management from the visitors, incensed the Griffin Park crowd.

“It was a 0-0 game and not a good game of football for both sides,” said Frank.

“Forest are a good side and they are where they are for a reason. They are well organised and set out to make it scrappy from minute one.

“When you see them timewasting so early you know you have done something good at Griffin Park. They paid us a lot of respect and didn’t let us get any tempo in the game.”

He added: “We have had sides come here and do the same and we have overcome it, but we had too many players scoring six and seven today.

“We knew they were a good team and it would be a tight game but we didn’t have enough of that quality we usually do, so we can only blame ourselves.”

The Bees head coach hailed Said Benrahma’s decision to play after his father’s funeral at the weekend.

Frank said: “He wanted to play and come back in and help the team and it was remarkable that he played the full 90 minutes.”

Forest boss Sabri Lamouchi hailed the three points as a “massive win on a difficult pitch against one of the best teams in the league”.

He said: “The players’ attitude, character and personality was perfect. We were lucky to score early on and this changed the game, but to be honest the team deserved this result.”

He was insistent that Lewis Grabban should have had a penalty after tangling with Ethan Pinnock, adding: “It was a clear penalty, but it wasn’t given”.

Lamouchi dismissed speculation linking Matty Cash with a move away from the City Ground.

He added: “It is just speculation but when you are getting points and playing well there is interest – I am just waiting for good news, not bad news.

“I have a fantastic squad and dressing room, but this league is so far, so long and so tough. One month ago, no one could imagine West Brom and Leeds losing so many points, but now it is different and game by game, step by step with 17 games to play we are being consistent

“We are where we are because the players deserve it but we have to be consistent because every game home or away is tough in this league.”