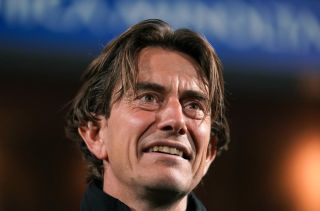 Brentford head coach Thomas Frank has signed a new contract tying him to the Sky Bet Championship promotion hopefuls until the summer of 2023.

The Dane took charge of the team in October 2018 having initially joined as part of Dean Smith’s backroom staff.

When Smith departed for Aston Villa, Frank took the reins and has now built a side challenging for a place in the Premier League.

The Bees have won five of their last seven league games and, with top-two West Brom and Leeds stuttering, third-place Brentford are closing in.

✍ We are delighted to confirm Head Coach Thomas Frank has agreed a new contract at #BrentfordFC— Brentford FC (@BrentfordFC) January 13, 2020

Such recent form has seen Frank agree fresh terms at Griffin Park and on Monday he put pen to paper on a new deal.

“I am very pleased that the club offered me a new contract and I was delighted to sign it,” he said.

“I love coming to work every single day and love working with the players and the staff here.

“There is a unique togetherness at Brentford and a unique focus on wanting to get better every day.”