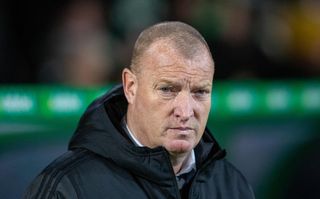 Brian Rice wants to see a major improvement from Hamilton against Celtic after admitting he did not recognise his own side during last week’s Livingston loss.

Accies slumped to a 4-2 defeat against the Lions at the Foys Stadium and Rice confessed his team failed to show the same hunger as their opponents.

All the main ingredients that have helped keep the Lanarkshire outfit in the top flight for six straight years were missing.

But Rice expects a big reaction when Neil Lennon’s champions visit on Sunday.

The Accies boss – who will be missing from the dug-out as he begins his five game ban for breaching gambling rules – said: “We were unrecognisable for large spells against Livi.

“The boys have been fantastic in the last six or seven weeks so we’re not going to get too down about the Livi result.

“Yes it was a bad day for us, yes we lost poor goals, but we can’t dwell on that and we won’t.

“What we have to do is make sure it’s not the same side that went out last Saturday that takes on Celtic and get back to doing what we do best.”