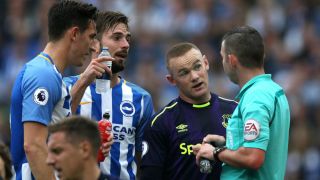 Wayne Rooney rescued Everton with a late penalty to secure a 1-1 draw at Brighton and Hove Albion, but their woeful performance will do little to ease the mounting pressure on Ronald Koeman.

Anthony Knockaert had appeared to have secured a win for the home side when he struck eight minutes from time, but Rooney saved the day with a spot-kick, undoubtedly proving a relief for Koeman, who was seemingly about to see his side lose a fifth league game in six.

The first half was every inch a match between two struggling teams, as neither managed to really take control and the only clear-cut chance fell to Brighton defender Lewis Dunk, who saw his effort deflected wide.

Things did improve slightly in the second period and Everton began to look more dangerous, with Mason Holgate and Nikola Vlasic seeing good opportunities fall their way just after the break.

But there was still an alarming lack of quality in the final third on show from both teams, until Knockaert capitalised on shoddy Everton defending to put Brighton on course for a third successive home win in the league.

There was a twist in the tale, though, as Rooney converted a penalty after bad foul from Bruno and Everton held on for the point, wrapping up a manic late show at the Amex Stadium.