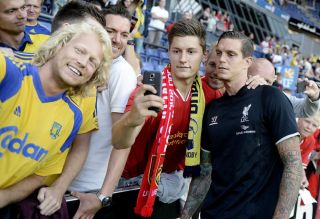 Agger's future at Anfield remains unclear with the Denmark international seemingly keen on a move, despite Liverpool manager Brendan Rodgers claiming he is "one of the best players we have" last month when the Premier League club played Brondby in a friendly.

While Barcelona have been linked with Agger on many occasions over the past 12 months, the La Liga club spent €20million on French defender Jeremy Mathieu last week, indicating they may be unlikely to spend big money on another centre-back.

Brondby, however, have made their interest in Agger public throughout the close-season and the Danish Superliga outfit hope they can lure the 29-year-old back to club of his youth.

"He is a dream player, there is no doubt about that," Andersen, Brondby's major shareholder, told 3point.dk on Thursday.

"We will work really, really hard to secure Daniel but as he has also said, when he was here with Liverpool, the timing has to be right.

"So let us hope we can tie up the loose ends. When that is, time will tell but we will go a long way to get him back because it will show where we set the bar. It will show that we have ambitions and will make a lot of fans happy."

Andersen added that he still believes Agger could sign for Brondby before the end of the current transfer window.

"We will do everything in our power but it is clear that we also need to be responsible and we need to do what is right at the right time," he said.

"But to answer the question, yes, we will do everything that we can, if and when the possibility arises, and see if we can tie up the loose ends."

Agger left Brondby in January 2006 after 49 appearances in all competitions for the club based in the western suburbs of Copenhagen.