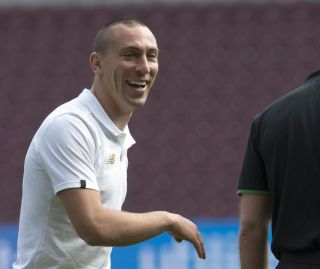 Birthday boy Scott Brown believes Celtic’s pre-season work will ensure they are celebrating once the new season gets under way.

The Parkhead skipper marked turning 34 with a gruelling double session amid soaring temperatures in Austria.

It was a tough start to the Hoops’ 10-day tour of central Europe but Brown says the tough training now will help ensure Neil Lennon’s team are on top form in time for their opening Champions League qualifier against Sarajevo next month.

Brown – whose side play their opening friendly clash against SC Pinkafeld on Wednesday – told CelticTV: “We had a double session today which was a great birthday present.

“The pitch is good, the weather is lovely and it’s what pre-season is all about – us getting fit, strong and ready for the games that are coming thick and fast now.

“Training in this heat is hard but it’s what we need to do. In some games in the Champions League and qualifiers, we’ve been away and it’s been 34 and 35 degrees and we’ve had to play through it.

“That’s been hard but that pressing mentality is something we try to enforce as much as we can. That’s what we’re here for, to try and get as fit as possible in the next couple of weeks.”

He added: “The first day was great. It was tough and it’s a bit warmer than we’d expected. They’re having a bit of a mini-heatwave over here at the moment, and today’s a double session. But that’s what it’s all about at pre-season.

“We’ve got two hours or so of work before we come back in, get some rest, avoid sunstroke, and then go back at it for the second round. There’s been a great intensity to everything so far. We’re looking at the stats and we’re still hitting the figures that we want to hit.

“We’re passionate out there, that’s part and parcel of training in the heat, but we’re equally always encouraging each other to do well. The better we do together as a team, the better everyone is likely to perform individually, and the better we’re going to perform on the park.

“The lads have got factor 50 on, so they’ll be fine with the heat. And I wouldn’t want to spend my birthday any other way.”