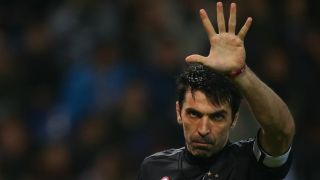 Gianluigi Buffon has voiced his delight with Juventus' 2-1 win over Sampdoria and is desperate to continue their winning streak.

Goals from Paul Pogba and Sami Khedira helped the reigning champions to their eighth Serie A win in a row, with Antonio Cassano's second-half strike nothing more than a consolation goal, and Buffon is hungry for more victories.

"We are definitely on a great winning streak," Buffon told Mediaset Premium.

"We are going through a good spell, which has been going for a while and I hope it will continue to last a lot longer.

"We thought we had already won the game after we went 2-0 up, but Sampdoria then got back into it because they really are a team with a lot of quality."

Sunday's win saw Juventus go second in the table following Fiorentina and Inter's defeats earlier this weekend after an underwhelming start to the season, but Buffon is not satisfied just yet.

"This is the Juventus we all want to see," he added.

"We are now second in the table, but we must keep improving.

"Juventus are never competing to finish second. We want the title again."