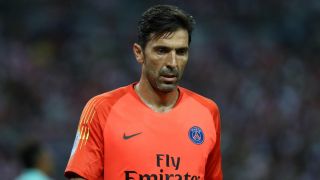 Gianluigi Buffon may be a decorated great of the game but the veteran goalkeeper insists he is not guaranteed to be Paris Saint-Germain's first choice.

The 40-year-old is one of three well-credentialed options in a strong group of shot-stoppers that includes Alphonse Areola and Kevin Trapp, who were selected for the World Cup by France and Germany respectively.

PSG boss Thomas Tuchel looks to have made his experienced new signing the frontrunner by starting him in International Champions Cup clashes with Bayern Munich and Arsenal.

But with 3-1 and 5-1 defeats in those matches, and the looming return of last season's incumbent Areola, Buffon is braced for a battle to be number one.

"I haven't spoken to anybody, but it's important for me to say one thing: in my 24-year career, nobody has ever told me 'you will be the main goalkeeper'," he said at a media conference.

"I believe that one has to train and put himself in the best condition to play when called.

"And once again I am here to do my best when I am called by the coach, but also to help everybody improve. So I have two functions."

1 - Alphonse Areola  became the 1st player in France’s history to be World Champion  without playing a single minute with Les Bleus (0 cap). Crazy.July 19, 2018

Buffon's surprise switch to the Ligue 1 champions came in the wake of his decision to end a successful 17-year stay at Juventus.

The World Cup-winning Italy icon says he has no regrets ahead of his first season outside Serie A.

"I feel very well," he said. "If I have chosen to continue playing and accept such a challenge it's because I love challenges, I love to do well and I love finishing my job in the best possible way.

"That's the challenge that I liked the most and the only one that could keep me playing. And I want to win this challenge with everybody's help. I could never do it alone."