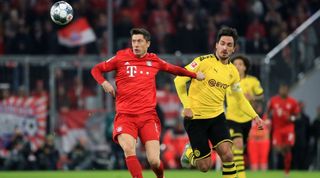 Bundesliga and German second division fixtures are scheduled to begin again over the first weekend in May, reports Kicker.

Professional football in Germany is currently postponed until April 30 because of the coronavirus pandemic.

Yet at a meeting involving all 36 clubs in the country's top two leagues, it was put forward that matches begin again shortly after that suspension is lifted. Games will be played behind closed doors.

The German Football League, the DFL, has given this proposal the go-ahead in principle, although there is little certainty as it is difficultt to predict how long the crisis will last for.

Their plan is still to conclude the 2019/20 season by June 30, as outlined by UEFA. DLF boss, Christian Seifert, says that is a reasonable expectation.

Extending the campaign beyond that raises bigger issues, primarily around out of contract players with deals due to expire in 2020 running out at the end of June. It would also have knock-on effects for the 2020/21 term, which is scheduled to begin in August.

Seifert expects there to be significant changes to the 2020/21 season regardless, but as things stand German football is set to begin again in a little over a month's time.

The key questions on the impact of coronavirus on football