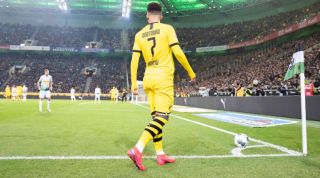 Manchester United have started talks with the agent of Jadon Sancho about the prospect of a transfer.

That is according to Italian sport journalist, Fabrizio Romano, who adds that no official contact has been made with Borussia Dortmund.

Dortmund know that there is plenty of interest in Sancho, but are refusing to budge on their asking price of £98m for the England international.

The winger, who has just turned 20, has enjoyed an incredible rise in stature since making the move to Germany from Manchester City in 2017.

Fearing he would lack first team opportunities at City, Sancho made the decision to leave for Dortmund and it has proven extremely fruitful.

The forward has already played 90 times for the Bundesliga club, with a fantastic record of 31 goals and 42 assists during that time.

Several Premier League sides are thought to be interested in Sancho, but Man United feel confident that they have won the race.

There is even speculation that they will offer a package that could see the youngster's wages rise as high as £400,000-a-week depending on his progress.