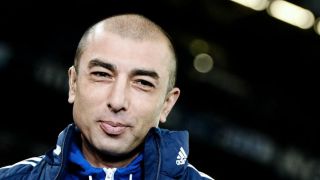 The Schalke boss will take charge of his first derby clash this weekend, having replaced Jens Keller in October, and will hope to oversee Schalke's second victory over Dortmund this season.

Under Di Matteo's predecessor, Schalke picked up a 2-1 home win in September and the former Chelsea manager feels the outcome of this game could depend on calm heads and composure.

"Even though I have no experience of the derby, I felt the buzz in my stomach from Monday and the closer the match comes, the greater it will be," he explained.

"Now, two days before the match against Dortmund, I'm already in a frenzy.

"Of course it is a game that will be dominated by the emotions, it will be a game full of passion. However, the tactics will play a crucial role."

After a woeful first half of the season, Jurgen Klopp's Dortmund have turned something of a corner in their Bundesliga campaign, although they go into Saturday's encounter off the back of a UEFA Champions League defeat to Juventus.

When the former Mainz boss eventually got round to speaking to the media, he praised Schalke.

"They have become a real results machine - even if the last two results were not right," Klopp said. "We need patience, without falling asleep."

Dortmund will likely be without defender Sokratis Papastathopoulos due to muscular discomfort, with Klopp adding: "There is nothing torn or pulled and we hope every hour that his muscles relax. It's not impossible [that he will play] but not terribly likely."

Kevin Kampl and Neven Subotic are doubts following bouts of flu while Lukasz Piszczek was ruled out for six weeks with an ankle injury on Wednesday.

Schalke, meanwhile, welcome back striker Klaas-Jan Huntelaar after he served his four-match suspension, although Joel Matip faces a period of around two weeks out with a pulled hamstring.