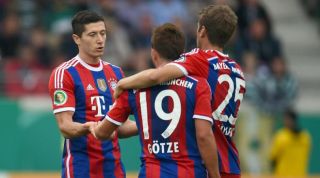 Benatia signed a five-year deal with the German champions on Tuesday after completing a reported €30million switch from Roma.

The Morocco international was heavily linked with Bayern ever since Javi Martinez suffered a cruciate ligament injury in their DFL Supercup defeat to Borussia Dortmund earlier this month.

The arrival of Benatia - previously linked with the likes of Manchester United, Manchester City and Chelsea - is a significant coup for a Bayern side who also announced on Thursday that they had agreed a deal in principle with Real Madrid for midfielder Xabi Alonso.

"FC Bayern is the best club in the world. I'm delighted to be here," Benatia said at a media conference on Thursday.

"I'm really looking forward to playing in the Bundesliga with the fans and full stadiums.

"I want to make the team even stronger than it already is and help out as much as I can."

Bayern have also signed Robert Lewandowski, Juan Bernat and Pepe Reina since the end of last season, and the club's busy transfer window gives them every chance of winning their third Bundesliga crown in a row.

And although a trip to Gelsenkirchen to face Schalke is usually one of the tougher assignments in German football, Bayern will surely feel like they are playing Jens Keller's men at the right time.

Schalke have endured a miserable start to the season, first being dumped out of the DFB-Pokal by third-tier Dynamo Dresden before then opening their Bundesliga campaign with a loss at Hannover.

Left-back Sead Kolasinac suffered a serious knee injury in the defeat at Hannover and he has joined a lengthy Schalke injury list that also contains the likes of Jefferson Farfan, Atsuto Uchida, Leon Goretzka and Fabian Giefer.

Bayern are also far from full strength, with Martinez, Bastian Schweinsteiger and Thiago Alcantara all absent.

Rafinha is battling an ankle injury and Franck Ribery is still carrying a knock, meaning that the likes of Gianluca Gaudino and Sebastian Rode could play a part again.

Both featured in Bayern's 2-1 win over Wolfsburg that opened the Bundesliga season last week.

Thomas Muller and Arjen Robben scored for the Bavarian giants, who were lucky to claim all three points. Wolfsburg's Junior Malanda somehow missed an open goal in the dying stages, denying the visitors an equaliser.

Guardiola's men were far from their free-flowing best on that occasion and he will demand an improvement at Schalke.

And with the hosts struggling, Bayern will hope to come away from one of their trickier fixtures this season with all three points.