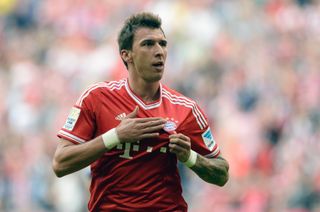 Pep Guardiola's side remain a point ahead of Dortmund and Leverkusen after stretching their unbeaten run in the Bundesliga to 35 games with a 3-2 victory over Hertha Berlin.

But they had to come from behind to secure all three points once again after Adrian Ramos gave the fourth-placed visitors an early lead.

Mario Mandzukic then scored two headers after coming on as a substitute in the first half in place of the injured Arjen Robben and Mario Gotze nodded in a third after he also came on during the first half when Toni Kroos picked up an injury.

Hertha caused the European champions plenty of problems and Anis Ben Hatira pulled a goal back with just over half an hour remaining, but Bayern held on for the victory.

If the Bavarian giants avoid defeat at Hoffenheim next weekend they will equal Hamburg's 30-year record of 36 games unbeaten in the German top flight.

Dortmund and Leverkusen are hot on the heels of Bayern after they also secured victories on Saturday.

In a game delayed slightly after a crowd disturbance, Dortmund beat Schalke 3-1 at the Vetins Arena to exact revenge for two defeats against their fierce rivals last season.

Pierre-Emerick Aubameyang and Nuri Sahin gave Dortmund a 2-0 lead, with Kevin-Prince Boateng having missed a chance to equalise when his penalty was saved by Roman Weidenfeller.

Teenager Max Meyer gave Schalke hope when he pulled a goal back, but Jakub Blaszczykowsk sealed the points for Jurgen Klopp's side with a third goal 16 minutes from time.

Leverkusen remain level on points with Dortmund after coming from behind to beat FC Augsburg.

Andre Hahn gave the visitors a surprise lead, but Simon Rolfes pegged them back with an equaliser 11 minutes before half-time and midfielder Emre Can popped up with a winner with seven minutes remaining.

Wolfsburg moved up to fifth by beating Werder Bremen 3-0 in a derby at the Volkswagen Arena courtesy of goals from Maximilian Arnold, Ivica Olic and Ivan Perisic.

Eintracht Braunschweig remain rooted to the foot of the table after a double from Shinji Okazaki secured a 2-0 victory for Mainz.

Hoffenheim moved into the top half of the table and leapfrogged nine-man Hannover by beating them 4-1 in their own backyard, with Roberto Firmino scoring twice in the space of two second-half minutes.

Striker Mame Biram Diouf was sent off for two bookable offences after just 12 minutes and Marcelo was also dismissed after remonstrating with the referee in the 64th minute on a miserable afternoon for Hannover.