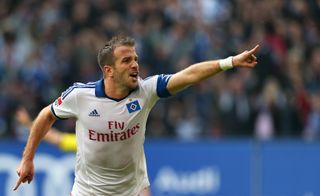 Bert van Marwijk's men had won just once at home in the Bundesliga all season going into the game and that run looked set to be extended when Alexandru Maxim put Stuttgart ahead within three minutes.

However, Hertha Berlin loanee Pierre-Michel Lasogga levelled the scores19 minutes later, only for Christian Gentner to head the visitors back in front prior the break.

After the interval, the goals continued to flow with Hamburg substitute Maximilian Beister equalising for a second time before Johan Djourou's own goal put Stuttgart back on top.

However, Rafael van der Vaart proved Hamburg's hero, securing a point for his side after 67 minutes finishing Beister's pass.

After Antonio Rudiger was shown a straight red card for for a foul on the Netherlands international, Hamburg pressed but were unable to find the winner.

Luiz Gustavo's first goal for Wolfsburg sealed a 2-1 win over Augsburg, although Dieter Hecking's side had to come from behind to win.

Tobias Werner put the home side ahead after 10 minutes only for 19-year-old striker Maximilian Arnold to level matters 10 minutes from the break with his first goal of the season.

Coincidentally, the goal was his first in the league since Bayern beat Augsburg 3-0 in May.