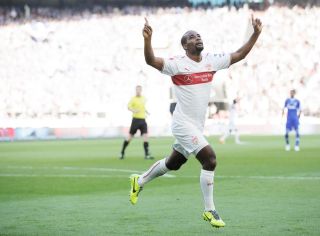 Huub Stevens' arrival at the Mercedes-Benz Arena has sparked an upturn in form for Stuttgart, who have picked up 11 points from a possible 21 under the Dutchman.

Their latest triumph came at the cost of one of Stevens' former clubs, with Martin Harnik opening the scoring from Daniel Didavi's free-kick 23 minutes in.

Cacau spurned a gilt-edged chance to extend Stuttgart's advantage eight minutes before half-time, but atoned for that miss after the interval when he converted Ibrahima Traore's cross.

The goal was the Germany international's first since September 2012.

Sascha Lewandowski has now won both games in charge since resuming first-team duties in the wake of Sami Hyypia's sacking to keep Leverkusen's Champions League hopes on track.

Hamburg's 3-1 defeat to Wolfsburg on Saturday gave Nuremberg the chance to jump into the relegation play-off place, but they capitulated in front of their home fans.

Emir Spahic lashed Leverkusen into a 16th-minute lead, but the visitors remained shaky at the back and Marvin Plattenhardt's free-kick from wide deceived everyone to sneak in for an equaliser.

Leverkusen turned the heat up in the second half though and went back ahead through Sebastian Boenisch's deflected effort.

Spahic netted a second after getting on the end of a rapid Son Heung-Min breakaway and Roberto Hilbert punished sloppy defending to add a dominant air to the scoreline.