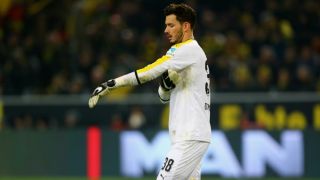 Borussia Dortmund goalkeeper Roman Burki admitted to mixed feelings after helping his side to a 0-0 Der Klassiker draw against Bundesliga champions Bayern Munich.

Burki was outstanding, keeping a clean sheet as second-placed Dortmund stayed five points adrift of Bayern in the table.

However, Burki still thinks he could have done better with some of Bayern's opportunities.

"I've got mixed feelings really," he said after the game.

"I should've done better on a couple of occasions but I'm glad I made the reflex save against [Arturo] Vidal.

"We'll analyse what we did wrong and learn from it. I'm glad we kept a clean sheet in the end.

"We showed we can compete on an even-footing with them. I'm very proud of this team."

Midfielder Sven Bender was happy with the result, despite missing an opportunity to move within two points of the Bundesliga leaders.

"We'll take the point. Bayern's lead has stayed as it was, but there are still enough games left to play," Bender said.

"We hope to be able to build on what we did today. There's still plenty of possibilities, but obviously Bayern are better placed at the moment.

"If they win all their games, then it'll be difficult for us, but we just need to keep winning our matches. I think that's the best way to put them under pressure."