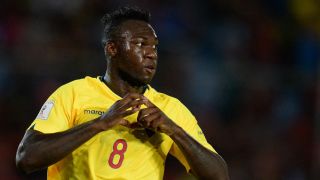 Ecuador striker Felipe Caicedo will miss the Copa America Centenario due to a hamstring injury.

It is the second instance of tournament heartache for the Espanyol striker in as many years after he missed the 2015 Copa America due to muscular injuries.

Caicedo, who has 19 goals in 59 appearances for his country, expects to be sidelined for a month before rejoining Espanyol for pre-season training.

"I received the official diagnostic [of the injury] and afterwards I spoke with [Ecuador coach Gustavo] Quinteros," said the 27-year-old.

"Unfortunately, I will be out for a month and I will need a new treatment."

He added: "It's been a difficult season, due to my injuries I have lost the chance to be with my team and defend the colours of my country.

"I hope to be able to smile again on the pitch, to play without injuries and give happiness to those who always believed in me."

Ecuador begin their Copa America Centenario campaign against Brazil at the Rose Bowl, Pasadena, on June 5.