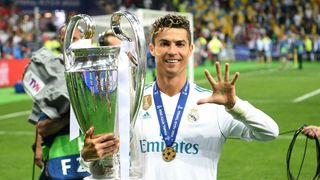 Speculation continues regarding the future of the Portuguese attacker with Juventus set to bid £88million for the five-time Ballon d'Or winner.

Ronaldo turns 34 next year, but supporters are still believe he is key to Real Madrid's success, and Calderon agrees, saying he hopes current president Florentino Perez can convince him to stay.

"If Ronaldo were to leave Madrid, he would leave a gap that would be impossible to fill," he told Tuttomercato.

"You can not easily find a champion who, in addition to participating decisively in team play, guarantees more than 50 goals per season, and much more for the past nine years.

"Florentino Perez has made excellent decisions for Real over the years, but he has the defect of not picking up the inheritance that is left to him by others. Something similar happened with Casillas and Raul.

"It culminated when Ronaldo realised Florentino didn't value him they way he should. He wanted a better salary, which is normal for the best employee in a company.

"He was upset when reports said Real were prepared to pay double his salary to Neymar."

However, Calderon did acknowledge that Ronaldo would be a terrific pick up for Juventus and Serie A.

"Juventus has long won the right to be considered one of the great clubs in world football, so it would not be strange if he left and chose the Bianconeri," he said.

"This acquisition would allow Juventus to consolidate their superiority in Serie A and give them an edge in the Champions League.

"Ronaldo is a huge market opportunity. Many clubs would like to have it."