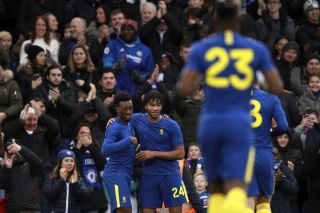 The 19-year-old England forward drilled home the opener then had a hand in Ross Barkley’s facile finish as Frank Lampard’s side coasted into the fourth round of the FA Cup.

Forest had a penalty chalked off after a Video Assistant Referee review, and Ryan Yates’ header ruled out for offside.

But this still remained a comfortable Chelsea win, and one to leave head coach Lampard eyeing an upturn in home form.

Hudson-Odoi will hope his first Blues goal since the 7-1 Carabao Cup victory over Grimsby on September 25 can propel him back to top form.

The teenager found himself clutching his right Achilles after one heavy challenge, however, in a small reminder of his continued drive back from surgery in April.

Hudson-Odoi appeared to suffer no after-effects from the robust tackle, but evidently remains mindful of that Achilles tear that yielded a premature end to last season.

Lampard has been at pains to shield the talented winger from criticism following a below-par performance in the Boxing Day 2-0 home loss to Southampton, while also demanding a hike in quality.

This was certainly a step in the right direction for a young man around whom Chelsea can build their long-term attacking blueprint.

While Barkley toasted his first Blues appearance since October with a tap-in, the England midfielder continues the search for full form and fluency.

Lampard questioned Barkley’s professionalism after a row with a Liverpool taxi driver in September, then reminded him to be on his guard after he was pictured topless on a night out in November.

Whatever encouragements Barkley provided in a tidy enough outing, this was surely still some way shy of the level required for a return to Lampard’s first XI.

Hudson-Odoi needed just six minutes to set Chelsea rolling, cutting in off the right flank to drill past Forest goalkeeper Jordan Smith at his near post.

The young England forward then produced a fine defence-splitting pass for Pedro, but the Spaniard could only strike Michy Batshuayi’s heel.

Had Pedro been able to whip the ball around the Blues’ Belgium striker, he would likely have doubled the hosts’ lead.

Forest battled to make that reprieve count, and thought they had won a penalty when 17-year-old Alex Mighten drew a foul from Fikayo Tomori in the area.

Referee Peter Bankes pointed to the spot, only for the penalty to be chalked off by the VAR for offside.

Chelsea were in no mood to waste their own let-off, and promptly regained control.

Barkley angled a raking ball out to Hudson-Odoi on the right and he cut into the area again before firing across the face of Smith’s goal.

A sloppy parry gifted Barkley a tap-in, and the Blues a 2-0 lead, just past the half-hour.

Chelsea eased to the break in complete control and were hardly troubled after the interval either.

Even when Yates nodded home a Forest free-kick, the offside flag came to Chelsea’s aid.

Hudson-Odoi continued to raid the flanks, whipping in several dangerous crosses. Batshuayi certainly should have buried the best of the lot, but he could only hack high and wide.