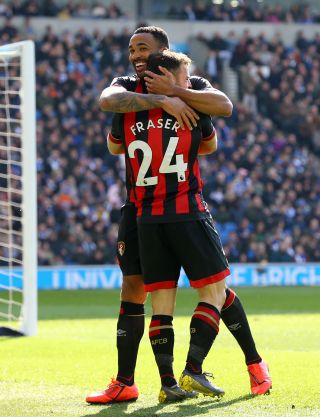 Newcastle have signed Bournemouth duo Callum Wilson and Ryan Fraser to boost their attack for the new Premier League season.

A deal for Wilson, understood to be worth in the region of £20million, was concluded just after midday on Monday before Fraser, a free agent after the expiry of his Cherries contract this summer, followed.

Wilson, 28, who has signed a four-year contract, revealed Magpies favourite Alan Shearer was the inspiration for his move – alongside fictional forward Santiago Munez.

✍️ #NUFC are delighted to announce the signing of Callum Wilson from @afcbournemouth on a four-year deal!— Newcastle United FC (@NUFC) September 7, 2020

Shearer, who scored 206 goals for the north-east club, first contacted Wilson as he recovered from a serious knee injury and the pair have stayed in touch since.

Wilson told NUFC TV: “It was really encouraging to hear it from such a legend. It was out of the blue, the text message, as well, so I was quite surprised, but I was so appreciative.

“We kept in touch – Shearer messaged me when I got a call-up for England and we’ve also been in touch about me coming here.

“I asked a few questions – what’s it like around the town and things like that – and he had nothing but praise for the football club and for the place.

“It was already in my mind I was coming here, but that just nailed it on, it was concrete.”

If Shearer provided the confirmation, it was watching the film ‘Goal!’, which charts the rise of Munez, an illegal Mexican immigrant living in Los Angeles, to stardom at Newcastle, with his son which whetted Wilson’s appetite amid interest from Aston Villa.

He said with a smile: “My son is getting to that age now where he’s watching more movies and more football, and he watched Goal! I’m sitting there watching it with him – obviously it’s all about Newcastle – and the little boy in me, it got me excited as well.

Wilson has been signed to score the goals which the Magpies lacked last season, with £40million summer signing Joelinton having managed just two in the Premier League in his first campaign, and he was a target even before Dwight Gayle suffered a knee injury which looks set to keep him out for up to four months.

His established link-up with Fraser will be a key part of the plan after the 26-year-old Scotland winger signed a five-year deal.

Fraser, who moved to the Cherries in January 2013 and made a total of 208 appearances for the club, said: “I’m absolutely buzzing for it – I came down to see the place the other day and it was just a no-brainer, really, to play in such a big stadium with such passionate fans, and being back up in the north again is big as well.

“So I’m really looking forward to it and I just can’t wait to show everyone what I can do, help the team and help us get back to where we belong.”

Head coach Steve Bruce said: “I’m delighted to bring Ryan to Newcastle United. We have held off big competition to get his signature.

“His ability and his contributions on the pitch speak for themselves. He has wonderful chemistry on the pitch with Callum Wilson, which excites me, and I hope it excites our supporters ahead of the new season.”

The club have also agreed a £13.5million fee plus add-ons for Norwich defender Jamal Lewis, who is currently on international duty with Northern Ireland.