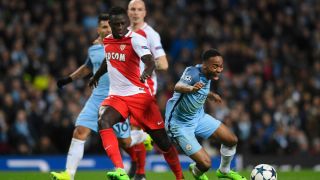 Monaco defender Benjamin Mendy has cooled talk he will imminently follow Bernardo Silva to Manchester City by disproving reports he is already in England.

Silva signed for City on Friday after a fine season with Monaco, who won Ligue 1 and reached the semi-finals of the Champions League, knocking out Pep Guardiola's side on the way.

And, with the Premier League club releasing a number of first-team players, Mendy and team-mate Fabinho are reportedly set to join Silva in Manchester.

But France international Mendy responded to a tweet claiming he had flown to England with a video showing him to still be in France.

"Manchester has changed," he said, with Paris' Champs Elysees in the background. "Calm down."

Mendy made his senior France debut in March, the 22-year-old having impressed at Stade Louis II since joining from Marseille last year.