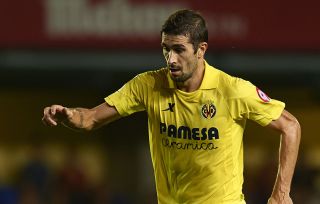 The 32-year-old has been in superb form so far, scoring two goals and providing four assists in eight games for Marcelino Garcia Toral's men.

Cani has been at Estadio Madrigal since 2006, when he joined from hometown club Real Zaragoza.

And the versatile playmaker, who can operate on either flank and in the centre, expects to remain with Villarreal for the long-term.

"I'm not thinking of the future but we should be talking soon," he told the club's official website.

"Even if it is my own future I don’t want anything to ruin my concentration, while I think the club will try to offer me what they think is fair and I’ll ask for what I think I deserve.

"The first thing is to begin negotiations, that’s clear, and I’m hopeful of reaching agreement.

"Both parties have the idea of me continuing so I don't think it will be a problem."

Marcelino's side sit fourth in La Liga having lost just once their first eight games.

But Cani insists the team's main ambition is still to stay in the top flight following promotion from the second tier last term.

"We now have games against teams who are just behind us. They are attractive ones in which everybody should be motivated to play," he added.

"However, if we manage to get good results in those there will still be a lot of games left, so despite us doing well it is not the time to alter our ambitions (of safety)."