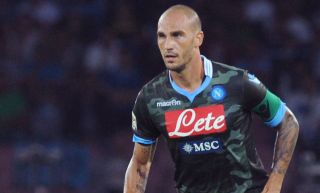 Cannavaro is in his second stint with his hometown club after rejoining in 2006 and has made over 270 appearances for the Stadio San Paolo outfit.

The 32-year-old was a regular under former boss Walter Mazzarri, but has played just three games since Rafael Benitez took over.

And his representative admitted that Cannavaro could seek a move if he continues to be left out of the starting XI.

"Paolo has gone from playing seven or eight games a month to a place on the bench," agent Enrico Fedele told Sportmediaset.

"He is certainly not happy about that, but he is continuing to train and being an example to everyone.

"I don't know if anything will change, but, in football, something can change in a second which remained unaltered for three months."

Fedele also suggested that Cannavaro could reunite with Mazzarri at Inter following discussions in the close-season.

"I don't know if Mazzarri is interested right now," he added.

"There was something in the summer, but not anything significant.

"If things don't change at Napoli then we could discuss the possibility of a transfer."