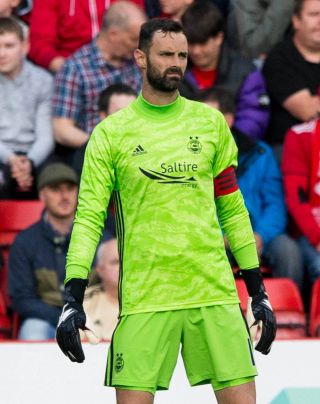 The Dons have tried and failed six times to reach the group stages under Derek McInnes, not even making it as far as the play-offs.

But with this year’s qualifiers reduced to single ties, the Reds know they just have to negotiate three more matches to reach the promised land.

Skipper Lewis, whose side kicked-off their latest attempt with a 6-0 victory over Faroese minnows NSI Runavik, said: “Our aspirations have to be to qualify for the group stages. That’s certainly our aim.

“We’ve got three more games to play to get that far. We don’t know who they’ll be against but you certainly have to be a bit fortunate in the draw.

“Maybe not fortunate – maybe it’s about not being unfortunate in the draw.

“Home ties would certainly help. It’s slightly less important with the supporters not being there but with the travel, you don’t want to be going too far away.

“But we’ve had experience of playing in Europe over the last few seasons. We’ve not quite got there but this football club should certainly be looking to get to the group stages.

“It’s something that a lot of players sign for this club for, to have the opportunity and experience of playing European football.”

Lewis insists Aberdeen have never been better equipped in his four years in the Granite City than they are this term.

And the added competition they have will be vital if they are to stop a high-flying Hibernian side sitting top of the Premiership table on Sunday.

“Every club looks to improve its squad each season and it remains to be seen how other clubs have done.

“But certainly I’m confident enough in what we’ve got. We’ve got pace, we’ve got power, we’ve got exciting players.

“We’re happy with what we’ve got in the changing room and we’re certainly going into Sunday’s game with confidence.”