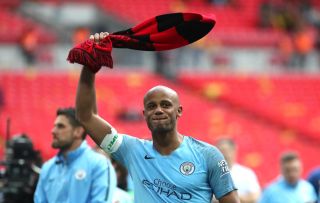 He signed off with victory in the FA Cup final on Saturday, where City thrashed Watford 6-0 to complete a domestic treble.

Kompany said: “As overwhelming as it is, the time has come for me to go. And what a season to bow out.

“I feel nothing but gratefulness. I am grateful to all those who supported me on a special journey, at a very special club.”

The central defender was signed by Mark Hughes from German club Hamburg, days before the Sheikh Mansour takeover.

He became a key figure in the success which followed, and leaves City having won four Premier League titles, two FA Cups and four League Cups.

“I remember the first day, as clear as I see the last. I remember the boundless kindness I received from the people of Manchester,” Kompany added.

“I will never forget how all Man City supporters remained loyal to me in good times and especially bad times. Against the odds you have always backed me and inspired me to never give up.

“Sheikh Mansour changed my life and that of all the City fans around the world, for that I am forever grateful. A blue nation has arisen and challenged the established order of things, I find that awesome.

“I cherish the counsel and leadership of a good human being, Khaldoon Al Mubarak. Man City could not be in better hands.”