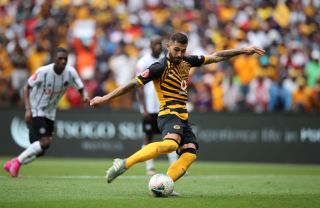 The Glamour Boys narrowly missed out on the league title during the 2019-20 season after surrendering the title to Mamelodi Sundowns on the final day of the season.

Amakhosi had to settle for second place on the final league standings after playing out to a 1-1  draw Baroka FC at the Bidvest Stadium in Johannesburg.

Cardoso admits that losing out on the league title was a 'bitter pill to swallow'.

'However, that’s now all water under the bridge,'  he told his club's official website. 'We need to look forward – we have a new coach, who is very ambitious, and he has set new goals and targets. We will definitely be knocking on the door with Hunt in charge.'

The 31-year-old was one of Amakhosi's standout performer's last campaign when he made 35 appearances across all competitions, while contributing five goals and assisting a further two in the process.