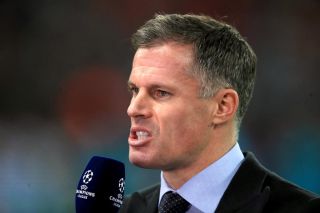 However, Carragher believes Klopp should be present for the match – the Reds boss has already announced under-23 coach Neil Critchley will be in charge – as it will not only be a boost for the youngsters but will avoid more unwanted headlines.

After blowing a 2-0 lead to draw with Shrewsbury on Sunday Klopp went public with his decision to leave out first-teamers for the return at Anfield as it clashed with their pre-arranged break.

Senior players having a winter break is right, you can’t implement one & then have a replay in the break. That’s the same for all PL clubs. But Klopp should take the team, his young players will be delighted & the picture of him in Ibiza with a 🍺 will be on every front page! https://t.co/l1h92byye2— Jamie Carragher (@Carra23) January 27, 2020

“Senior players having a winter break is right, you can’t implement one and then have a replay in the break. That’s the same for all PL clubs,” Carragher wrote on Twitter.

“But Klopp should take the team, his young players will be delighted and the picture of him in Ibiza with a (beer emjoi) will be on every front page!”

Klopp employed a similar tactic in December when there was a clash between their Club World Cup commitments in Qatar and a Carabao Cup quarter-final at Aston Villa, where Critchley led a young side to a 5-0 defeat.

The Liverpool manager has been a regular, vociferous opponent to fixture scheduling and the impact it has on players and so will now not perform a u-turn because they have another game to fulfil during a period when his players had been given much-needed time off.

Such was the need for the players to have time away from football Klopp opted not to take them away on a warm-weather training camp but has instead told them they can have time to themselves as long as they maintain a pre-arranged fitness plan.

His stance, PA understands, is supported by the club’s ownership.

“In April 2019 we got a letter from the Premier League, I think, where they asked us to respect the winter break and not to organise international friendlies or competitive games. We respect that,” said Klopp.

“So I said to the boys already two weeks ago that we will have a winter break, which means we will not be there. It will be the kids who play that game.

“You cannot deal with us like nobody cares about it. I know that it’s not very popular but that’s the way I see it.

“The Premier League asked us to respect the winter break. That’s what we do. If the FA doesn’t respect that, then we cannot change it. We will not be there.

“Does that mean I won’t be there? Yes. Neil Critchley will be in charge.”

Jason Cummings scored both Shrewsbury goals on Sunday after Curtis Jones and a Donald Love own goal had put Liverpool ahead.