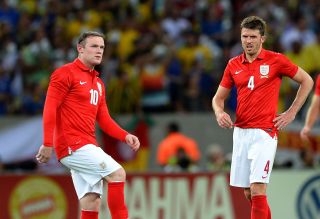 The 27-year-old barely featured for the title-holders in pre-season after suffering with hamstring and shoulder problems, but returned to play 30 minutes in their Premier League opener against Swansea City on Saturday, grabbing two assists.

The England international received a warm reaction from the fans, despite having requested to leave the club last season and United having already turned down two bids from Chelsea.

Carrick does not feel it will affect Rooney's relationship with the team though, insisting that they will continue to support him.

"He is a big Manchester United player," the 32-year-old said.

"He's one of us and we all stick together.

"When we're on the pitch, we fight for each other and do what we can for Wayne. He's certainly part of that.

"I thought he came on and looked good. He set up two goals and that's what he's all about.

"But he has given this club an awful lot so the fans support him and we support him. As I said, we stick together."

The striker's future continues to hang in the balance with Jose Mourinho hinting that Chelsea would continue to pursue him until the close of the transfer window.

Rooney, who also featured for an hour of England's friendly win over Scotland last week, scored 16 goals in 37 games for United last season.