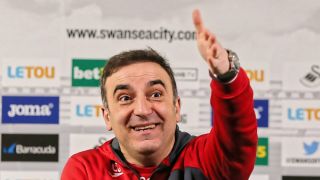 Carvalhal's contract was up for renewal but Swansea will have a different man in charge for their Championship campaign in 2018-19.

The Portuguese, appointed as the successor to Paul Clement last December, initially oversaw an upturn in form and Swansea climbed out of the relegation zone.

But the Swans failed to win any of their last nine Premier League matches, scoring just three goals in that run, to drop to the Championship.

"We'd like to put on record our thanks to Carlos for his enthusiasm, hard work and commitment since arriving at the club in December," said chairman Huw Jenkins.

"Naturally, we are all disappointed with the club's relegation from the Premier League, and following discussions with Carlos, we felt it was in the best interests of both parties that we move in a new direction.

"We will now be looking to appoint a new manager in readiness for the 2018-19 season. While there are already rumours linking us with several managers, it is vital that we identify the right person to take this team forward."

8 - Swansea have failed to score in eight different Premier League home games this season, more than any other side. Stifled. May 8, 2018

"While Swansea and myself will go in a different direction, I wish the club all the best," said Carvalhal. "I am sure I will be a Jack forever."