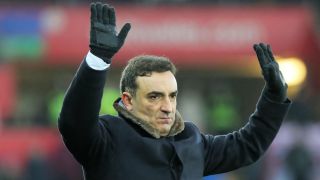 Swansea City manager Carlos Carvalhal described his side's performance in their 4-1 victory over West Ham as the best since he arrived in December.

Under the Portuguese, Swansea have won five of their nine Premier League fixtures and the triumph over David Moyes' beleaguered Hammers lifted Carvalhal's men out of the relegation zone.

"It was rock and roll here at the Liberty," he told reporters.

"It was the best performance since I arrived. I am very happy, we made an important step this afternoon."

Andre Ayew, making his first start for Swansea since re-joining the club from West Ham in January, starred for the home side and won the penalty from which his younger brother scored their fourth goal.

Carvalhal preferred not to single any one player out for credit, saying: "When we win 4-1 it's not about one player. It looked like we played with 11 brothers instead of two.

"This win was very important. We feel confident when we play at home."

In stark contrast, Moyes said West Ham's performance was their worst during his four months in charge.

"We played so bad. I couldn't assess it, it was that poor," he said.

"The fans travelled through the snow to get here and we let them down badly.

"That was the poorest performance since I came here. I'm embarrassed.

"We conceded from two corners and a penalty. We had no intensity in our play, we thought we could just stroll about.

"I can only say to the supporters that I will do everything to make sure we are ready for the next game and hopefully they're behind us when we get to the London Stadium next week.

Moyes also provided an update on the injury to defender Winston Reid, who had to be taken off on a stretcher after 27 minutes with a severely twisted knee.

"He's fallen and damaged his knee," said Moyes. "He's awake and I don't know if a scan will get done tonight."