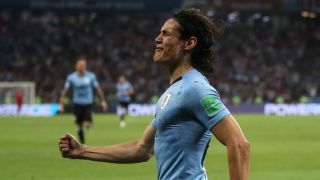 Edinson Cavani is "in pain" ahead of Uruguay's World Cup quarter-final with France, but a scan on a calf injury has at least confirmed no tear to the muscle.

Cavani limped off shortly after scoring his second goal in Uruguay's 2-1 defeat of Portugal, which booked their last-eight spot.

Coach Oscar Tabarez said after that win he was unsure whether or not Cavani would recover in time to play a further part in the tournament. And a medical update released by the Asociacion Uruguaya de Futbol (AUF) on Monday appeared to cast further doubt on Cavani's chances of being fit to face Les Bleus.

A scan showed Cavani has suffered an "edematous lesion in the internal twin muscle of his left leg," but added it was "without breaking muscle fibres".

Speaking after the Portugal game, Cavani had said: "I hope it's nothing. We'll see what happens, we'll do [medical] exams. I felt pain in my calf and could not continue on the field."