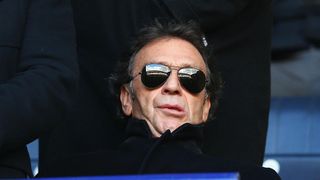 Leeds United have announced Andrea Radrizzani has completed his takeover of the Championship club.

Radrizzani previously bought 50 per cent of the club in January and has now purchased the remaining shareholding from previous owner Massimo Cellino to take full control at Elland Road.

The new owner paid tribute to predecessor Cellino and stressed he sees his involvement at Leeds as a long-term commitment.

"I am delighted to have the opportunity to become a custodian of this great football club," said Radrizzani, who becomes Leeds United's chairman with immediate effect.

"The heritage and history of Leeds United attracted me to the club and having spent time at games and at [training ground] Thorp Arch, I can see that we are ready to move forward to the next level.

"This is a long-term commitment, there is a lot of hard work ahead of us and I am aware of my responsibilities as owner of Leeds United. I can assure all supporters that everyone at this club will be doing all we can to build a successful team at Elland Road.

A very special day...proud to be part of Leeds United. Will work hard to bring joy to all fans May 23, 2017

"Massimo has been incredibly supportive throughout the investment process and I am grateful that he has afforded me the opportunity to purchase Leeds United. We have had a positive 12 months and I am inheriting a club with a good squad and talented, hardworking staff. Massimo acquired a club in a difficult financial situation but he has created a sound platform for me to take Leeds United forward into a new era."

Cellino was banned from football for 18 months and fined £250,000 for breaking agent regulations in Ross McCormack's transfer to Fulham in July 2014.

In his own statement, the outgoing Leeds owner said: "I have been proud to work at Leeds United, with nice people who have worked at the club with me.

"If you can survive working with me, you can survive anything! I have always taught people to work for the club and not for me and in the end the staff have done so in a beautiful way.

"I wish Andrea good luck, I am sure he will continue what I have started and show that people from our country are honest and hard-working people. Owners come and go but Leeds United will be there forever, for the fans - keep Marching on Together. Goodbye and farewell."