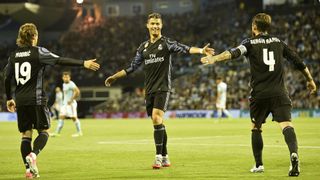 Cristiano Ronaldo scored twice in Wednesday's 4-1 win over Celta Vigo as the in-form Real Madrid talisman fittingly took Zinedine Zidane's men to within a point of the league title.

Madrid went into the match knowing that four points from their final two La Liga games would guarantee them the crown regardless of Barcelona's efforts and they successfully passed their first test in an expert manner in Galicia.

It proved to be a strong start by the visitors and they found themselves ahead early on thanks to their Portuguese superstar, who overtook Jimmy Greaves as the most prolific player to grace Europe's top five domestic divisions, scoring his 367th and 368th goals across England and Spain.

There were not too many other opportunities for the away fans to get excited about in the first period, but Ronaldo made Celta pay for their wastefulness with a second just after the break, rounding off a devastating counter-attack.

Celta's – and Barcelona's – hopes seemed to be dashed when Iago Aspas was controversially dismissed for diving just after the hour, but the hosts' response was excellent, as John Guidetti clawed one back.

But Madrid stepped up another gear shortly after, Karim Benzema and Toni Kroos wrapping things up, meaning they only need to draw at Malaga in their final game of the season to lift their 33rd La Liga title.

Celta looked lively during the early exchanges, but Madrid were typically lethal and took a step closer to the title just 10 minutes in.

Facundo Roncaglia tackled Isco on the edge of the area, only for the ball to drop kindly for Ronaldo, who hammered a ferocious left-footed drive through Gustavo Cabral's legs and beyond the helpless Sergio Alvarez.

That proved one of few Madrid chances in the first half, though, as a purposeful Celta began to take over.

Keylor Navas went unpunished just after the half-hour mark, as he palmed Daniel Wass' effort into the danger zone and Roncaglia failed to react quickly enough to the rebound.

And some of the home fans thought they were level nine minutes before the break.

But Aspas' effort only found the side netting after latching on to a Pione Sisto pass which deflected off Danilo.

Celta threatened early in the second half, as Wass picked out Guidetti in the Madrid area before the Swede was crowded out.

And a few seconds later, Madrid had a two-goal lead.

Isco did brilliantly through the middle, charging past a couple of defenders and slipping a pass beyond the defence for Ronaldo, who coolly slotted inside the left-hand post.

Referee Juan Munuera then incurred the wrath of Celta as he deemed Aspas to have dived under a challenge from Sergio Ramos, brandishing a second yellow in the striker's direction, before also sending off coach Eduardo Berizzo and his assistant.

Guidetti struck back for the frustrated Celta a few moments later, as the forward's deflected 18-yard effort left Navas stranded, but Benzema finished them off with a tap-in from Marcelo's low cross 20 minutes from time.

The French striker was instrumental again just before the end, pouncing on a defensive error and feeding Kroos into the left side of the area, with the German confidently finding the net to wrap up a resounding win and leave Madrid on the brink of the title.