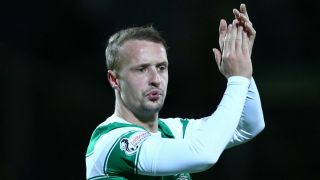 A Leigh Griffiths hat-trick inside an hour helped Celtic hammer Hamilton Academical 8-1 at Celtic Park on Tuesday as Ronny Deila's men went six points clear at the summit in style.

Deila decided against handing new signing Erik Sviatchenko his debut but saw Celtic exploit their visitors' defensive troubles from the off as Mikael Lustig opened the scoring four minutes in with a header from Stuart Armstrong's free-kick.

Nir Britton and Tom Rogic added to the scoreline inside the opening 10 minutes before Griffiths got on the scoresheet for the fifth game running with a finish following Gary Mackay-Steven's precise pass.

Rogic laid on Griffiths' second 11 minutes before half-time as Celtic scored five in the opening period for the first time since the 6-2 rout of Dundee in March 2000.

James Forrest made it six eight early in the second half before Griffiths moved to 20 league goals for the season a minute later as he charged down Michael Devlin's clearance before lobbing Michael McGovern.

Hamilton have dropped down the table rapidly in recent weeks after a promising start to the campaign and Eamonn Brophy gave the visiting supporters something to cheer with a calm slotted finish.

But Callum McGregor rounded off the scoring on a humiliating night for Martin Canning's side a minute from time - finding the top corner from the edge of the area to restore Celtic's six-point cushion.

Hamilton remain 10th but share the same goal difference as Kilmarnock a place below them after being on the end of a clinical Celtic display.