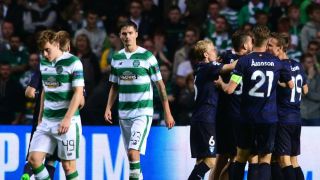 Celtic and Rangers competing in the same league as England's biggest clubs is an "inevitable" prospect and could happen within the next decade, according to Dermot Desmond.

The majority shareholder of Celtic is of the belief such a switch would be beneficial to clubs on both sides of the border and feels the two Glasgow sides are already inside the biggest 10 clubs in the United Kingdom.

Ronny Deila's Scottish champions have failed to progress to the Champions League group stage for the second straight season, while Rangers are in the Championship after they were unable to win promotion last year as they continue their bid to return to the top level after being relegated to the fourth tier following financial meltdown in 2012.

A lack of comparable television revenue is often cited as a reason for Scotltish clubs' struggles to progress in Europe and rival Premier League sides for playing talent.

Such a move for Scotland's Old Firm rivals has been mooted before but was shelved in 2009 after discussions between Premier League chairmen resulted in a consensus against the switch.

Desmond, though, is confident change will be back on the agenda in the near future and is almost certain Celtic and Rangers will be facing the likes of Arsenal and Manchester United in what he called a "British Premiership" before 2025.

"We would like to compete in the Holy Grail in England," he told Sky Sports. "It will bring money into Scotland and rekindle football in Scotland having United, Arsenal and others.

"Maybe it is going to be 10 years but I think it is inevitable. Rangers and Celtic are among the top 10 teams in Britain and some of the biggest teams in the world - they should be competing at the highest level.

Celtic boss Deila is also of the belief a move is likely, but the Norwegian acknowledged any final decision would take considerable time.

"I think that could be possible but again it is not easy to do things very quickly in Britain," he said ahead of his team's Europa League game with Fenerbahce.

"It takes time but I think Celtic is a team that should be playing the best and have an opportunity to be playing in the best league. Hopefully in the end we can get into the Premier League or a British League."