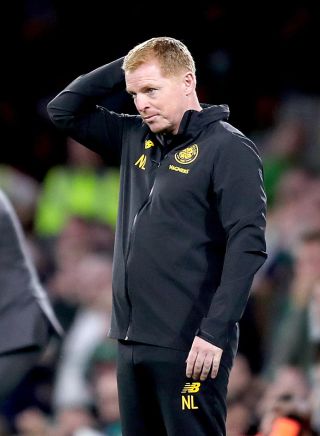 Neil Lennon bemoaned a “wasted” first half and some self-destructive defending after his Celtic side crashed out of the Champions League.

The Hoops were heading out on away goals before George Tucudean netted with the last kick of the ball to seal a 4-3 win for Cluj at Celtic Park and a 5-4 aggregate victory for the Romanians.

Celtic’s first two efforts on target came in the opening minutes of the second half and they came from a goal down to lead just after the hour mark through James Forrest and Odsonne Edouard.

They had chances for a third but a handball under no pressure from Scott Brown allowed Billel Omrani to level from the spot and the goalscorer struck again four minutes after Ryan Christie’s quickfire response.

Lennon said: “The first half we were so passive, no tempo, I don’t know where that came from. We weren’t physical or aggressive enough and certainly didn’t work hard enough to stop crosses, second balls.

“We got a warning beforehand and didn’t stop the cross and then we do the exact same thing again.

“At half-time we got after them a little bit and got the right response but we shot ourselves in the foot with the goals we conceded. We had the lead twice and we have given it away.

“The first goal you are thinking ‘right wake-up call’, the second goal was an individual mistake, the third goal we had plenty of defenders back but we just let the guy run off us and get the shot away and should have done better with the rebound. The fourth goal is academic because we are trying to throw everything at them to get an equaliser.

“We had enough chances to win the game but we wasted 45 minutes. If we had played anywhere near as well in the first half as we did second half, we would have been through.”

“Just to get (Olivier) Ntcham in midfield because he has been playing well and to have a couple of technicians on the field as well, and we know Boli has been a bit up and down with his form,” he said.

“I don’t think that really affected the result. I mean he (McGregor) set up the first goal, played very well, and Ntcham had a fine game as well.”

Lennon now drop down to the Europa League play-offs where they will face AIK Stockholm or Moldovan side Sheriff with the Swedes 2-1 up ahead of their home leg.

“It’s hugely (disappointing) for us all,” Lennon said. “We are going to have to accept the criticism that comes our way whether it be from the media or our own supporters or elsewhere.

“We have to regroup and make sure we qualify for the Europa League and make a strong claim in that.”

Cluj head coach Dan Petrescu led Unirea Urziceni to a 4-1 win over Rangers at Ibrox in 2009 but declared this win a greater achievement.

“I can’t believe it, it’s the second time I have played in the Champions League in Scotland and my team scored four goals,” he added.

“I never expected that. I told my players they would have to play the game of their lives and told them it would be a miracle if Celtic didn’t score, because they have so much quality they can win against any team in Europe.

“It’s one of the best victories in my career.”