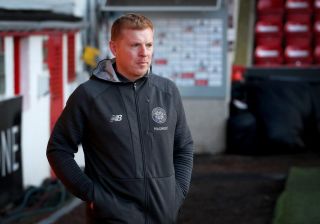 Neil Lennon admits Celtic should have left themselves in a stronger position following their 1-1 Europa League draw with FC Copenhagen in which Fraser Forster saved a VAR-awarded penalty.

On a perishing night in the Parken Stadium, Odsonne Edouard missed a couple of early chances before scoring with his third opportunity in the 14th minute, and the Scottish champions bossed the rest of the first half.

However, the home side fought back and Senegal striker Dame N’Doye levelled in the 52nd minute.

Celtic experienced VAR for the first time in a competitive game as Russian referee Sergei Karasev used a pitchside monitor before awarding Copenhagen a penalty in the 78th minute after a Ryan Christie hand ball, but Forster tipped Jens Stage’s penalty onto a post and away.

Lennon said: “I am disappointed if I’m honest that we aren’t ahead in the tie. I thought we had good control of the first half and going in 1-0 at half-time I thought we could have been maybe two or three up.

“We gave away a poor goal from our point of view and it gave Copenhagen a huge lift psychologically.

“But on the counter-attack we had some great chances in the second half as well, so I’m disappointed we haven’t come away with more goals.

“I think most people would have taken that before the game. It was a partisan crowd, a difficult atmosphere to play in, it’s loud.

“I thought in the main the players handled it pretty well, just in the last 20 minutes they had to dig in, dig deep and show some resilience.

“Obviously we lost Browny (Scott Brown) with a calf strain and we’ll have to see how that is but in the main we are pleased with the score.

“It was a great game of football, it ebbed and flowed.

“In the first couple of minutes we had a great chance and then another shortly after that and then we scored. We then had a couple of great counter-attacks we could have picked them off and put the tie to bed.

“It shows that we can score against them, that’s for sure, and open them up.

“But we have to pay respect to Copenhagen, they came back very strongly in the second half.”

Forster saved his fourth penalty out of seven this season, and Lennon said: “He’s brilliant, but that’s down to the work that he and Stevie Woods (goalkeeping coach) do behind the scenes.

“I have no real complaint about the penalty, it does come off Ryan’s arm in an unnatural position if you want to call it that.

“Credit to Fraser, he’s done brilliantly with a magnificent save.

“I think it would have been really harsh on us if we’d lost the game with the amount of chances we had, especially in the first half.

“But we have the away goal, so the tie is set up nicely for going back to Glasgow.”