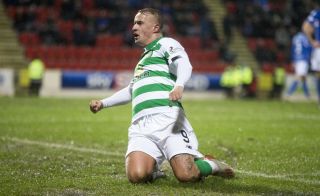 Celtic made it 30 goals without reply against St Johnstone after sweeping their hosts away in the opening half hour to win 3-0.

Olivier Ntcham, James Forrest and Leigh Griffiths struck inside 27 minutes as Celtic overran the Perth side to maintain their five-point lead in the Ladbrokes Premiership.

Celtic now have an aggregate score of 30-0 against Saints in the past nine games.

Neil Lennon lined up with Forrest and Greg Taylor as advanced wing-backs ahead of a back three with Griffiths partnering Odsonne Edouard up front and St Johnstone could not cope with the waves of first-half attacks.

The champions lost their intensity after the break but Tommy Wright’s side deserve credit for competing after earlier looking like they were headed for a repeat of the 7-0 thrashing they suffered at Parkhead on the opening day of the league season.

The visiting supporters occupied three of the McDiarmid Park stands after St Johnstone controversially decided to move some season ticket holders into the main stand. The official attendance was 8,743 with 6,339 visiting fans and Celtic quickly dominated on the park as well as off it.

Celtic blew Saints away from the start and could have been ahead before Ntcham’s sixth-minute opener.

The opener came from the other flank as Forrest delivered a cross for Ntcham to head home unmarked from six yards out.

Celtic kept attacking. Taylor had a shot parried, Griffiths was denied by a good block from the follow-up and Callum McGregor fired just wide from 20 yards, while Zander Clark had to save a sliced clearance from team-mate Jason Kerr.

Michael O’Halloran and Ali McCann had shots comfortably saved at the other end but it was otherwise one-way traffic.

The second goal came in the 20th minute after McGregor fed Forrest inside the box. The wing-back took one step outside Scott Tanser and fired into the far corner.

Celtic’s intensity increased further. Griffiths forced a save, Edouard cut through the heart of the Saints defence and trundled a shot just wide, and McGregor mis-kicked after being set up by Forrest.

That was all in the seven-minute hiatus between goals before Griffiths volleyed home Taylor’s cross from 12 yards.

There were claims that a water bottle was thrown at Saints keeper Clark from the Celtic support in the wake of the goal.

The strike proved the plateau for Celtic, who took off pre-match injury doubt Jozo Simunovic at half-time and brought on Moritz Bauer, moving Scott Brown further back.

Saints had the better of the chances in the second half. David Wotherspoon’s bouncing effort was parried wide by Fraser Forster and Kerr saw his header cleared off the line by Celtic substitute Patryck Klimala.