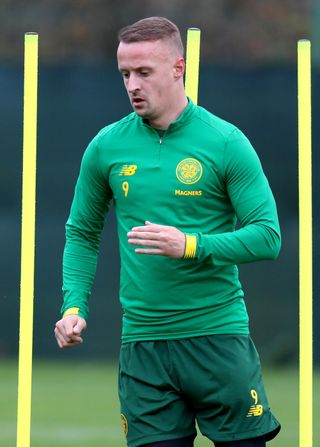 Neil Lennon welcomes back a “happy” Leigh Griffiths to the Celtic squad for the visit of Livingston on Saturday.

The Hoops striker has been out since a 3-1 victory over Hearts in late August due to personal problems which were followed by niggling injuries and a virus.

However, Griffiths scored a brace for Celtic reserves against Stenhousemuir in a friendly at Lennoxtown earlier in the week which was enough proof of rehabilitation for the Parkhead boss who has had French forward Odsonne Edouard leading the line for most of the season.

“He will be involved with the squad,” said Lennon.

“Slowly but surely. He had an hour on Tuesday, he looked good so he will be in and around it.

“He is good, he is happy. He needs to stay there now and improve his conditioning. It is bit by bit but we have seen enough now to think he may make a contribution.

“We have 11 games between now and the end of December and we will be using the squad and Leigh obviously is a part of that.”

Lennon also believes Scotland forward Griffiths could make a material difference to the national side, who discovered on Friday that they will face Israel in the Nations League semi-final play-off at Hampden Park in March.

The Northern Irishman said: “If fit, no question.

“When he is ready and if he is in the groove he will be a real asset for Scotland, there is no doubt about that.”

Lennon understands the clamour for fixtures to be postponed ahead of Scotland’s crucial play-off which gives the chance for Steve Clarke’s side to play Serbia or Norway away in the final, with the winners going to the European Championship next summer.

Be the first to hear about ticket information for our play-off semi-final against Israel at Hampden.— Scotland National Team (@ScotlandNT) November 22, 2019

“It is going to be difficult to do that,” said Lennon, who was “screaming at the telly, it was a real heart in mouth moment” when he watched James Forrest go down injured in Scotland’s 3-1 win over Kazakhstan at Hampden Park on Tuesday night, before the Hoops winger recovered.

“I don’t know how you change the fixture list and there could be things in front of you that you can’t foresee, although ultimately everyone in Scotland would like to see the national team progress.

“But I think it a great opportunity now.

“It is a good draw. Scotland finished the campaign pretty well.

“Obviously we are talking another two or three months down the line, things could change.

“There is a structure now with Steve’s team, he knows his personnel and then you are going to have the likes of (Kieran) Tierney, (Scott) McTominay and (Andy) Robertson from the Premier League to come into that group as well.”

Lennon noted that league leaders Celtic have won all seven games since the shock 2-0 defeat by Livingston in West Lothian last month.

He said: “The reaction from that defeat has been superb. The football we have played, the results we have had, the quality of performance and levels of real intent has been excellent.

“I want to pick that up as quickly as we can. We haven’t scored against them in three games so that has to be changed so we are very motivated to win the game with what is ahead of us.”

Defender Hatem Abd Elhamed is out for another couple of weeks with a heavy abductor strain while attacker Mohamed Elyounoussi is out for seven to 10 days with a foot injury.

Meanwhile, UEFA’s Control, Ethics and Disciplinary Body has fined Celtic 15,000 euro (£12,777) for an illicit banner and illicit chants in the Europa League game against Lazio at Parkhead last month.